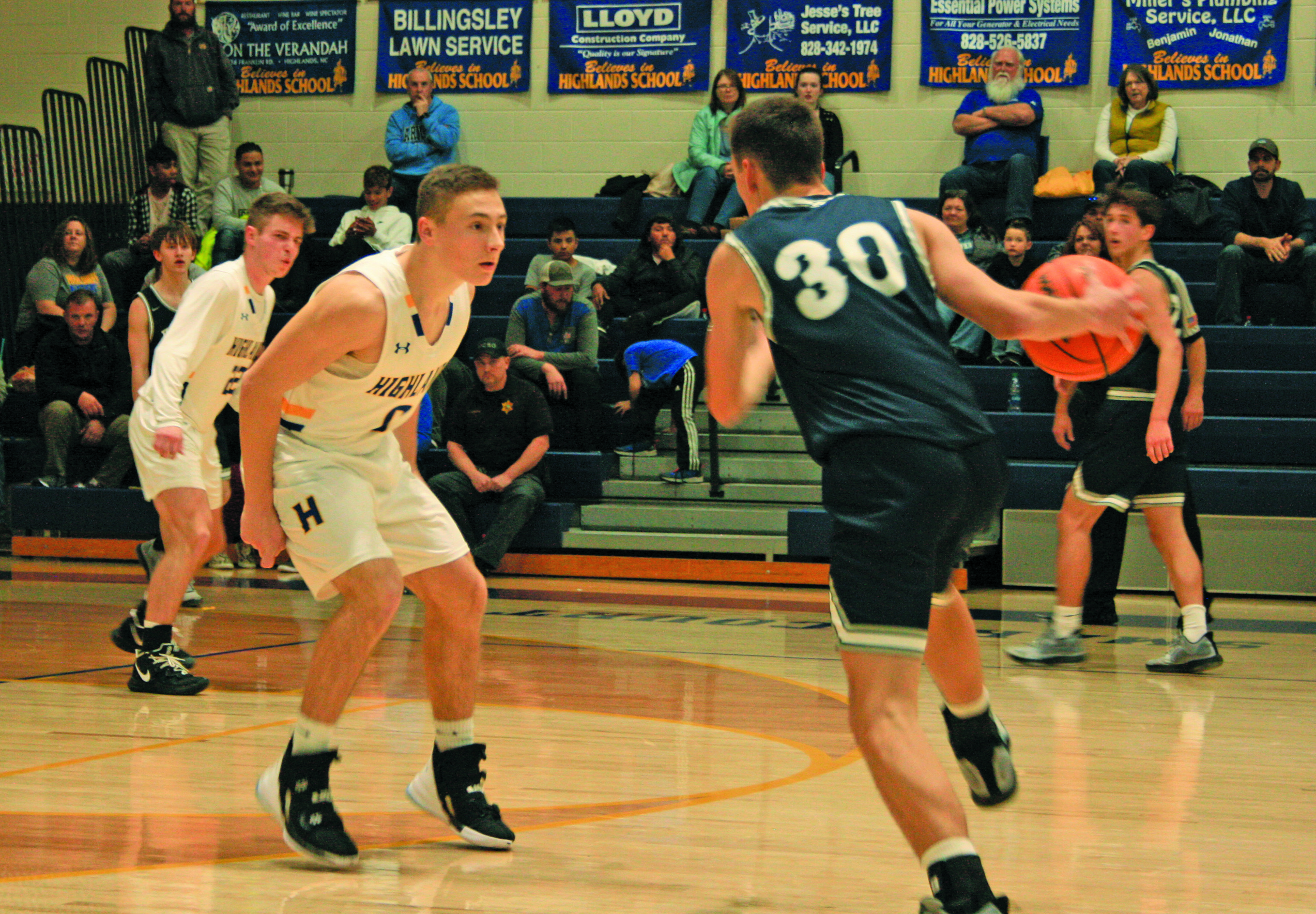 The win was critical to keep the Highlanders in the mix for a potential regular season conference title and state playoff spot.

“Having lost our first league game to Hiawassee Dam, we knew that we didn’t want to start 0-2 because that is so hard to come back from in a four-team league,” Highlands head coach Brett Lamb said. “Nantahala has a team that can really shoot the ball and we knew that going in. Fortunately, we were able to make some shots too in the second half and get the win.”

The teams traded baskets throughout much of the first quarter, but Nantahala jumped in front 22-17 after a pair of Highlands turnovers led to back-to-back buckets by Dylan Stroud to open the second period.

Highlands adjusted to the Hawks’ box-and-one defense on HHS leading scorer Reid Carrier and began to find post players for open looks in the paint. Bill Miller sank a short jumper and followed with an and-one off a rebound as Highlands closed the first half on a 10-0 run to take a 31-25 lead.

The Highlanders built on their advantage in the third quarter as Miller continued to wreak havoc under the basket and Carrier began to work free for open outside shots. The home team scored 26 points in the quarter and extended the lead to double figures.

“Coming off the game against Franklin where Reid had 42 points, we knew teams would start paying him a lot of attention with their defensive schemes,” Lamb said. “He picked his spots well tonight and (Miller) had a big game for us and really emerged as that second scorer when we needed it.”

Nantahala cut the deficit to eight points early in the fourth quarter, but could not draw any closer after consecutive 3-point buckets from Carrier and Brent Sleight sealed the outcome.

“Nantahala is a really well coached team and (Stroud) is a heck of a ball player,” Lamb said. “We got the win tonight, but in a couple weeks we have to go over to their gym and play an even better game because that’s a tough place to play and they’ll make adjustments.”

Stroud finished with 26 points and 14 rebounds in the defeat. Dillon McLean added 13 points for the Hawks and Troy Bernhardt dropped in 10.

Miller and Carrier each finished with 25 points to power the Highlanders. Gig Chalker was the only other HHS player in double-figures with 10 points.

Highlands (3-9 overall, 1-1 LSMC) will travel to Cherokee on Friday.

Every player who entered the game for Highlands scored at least one field goal as the Highlanders easily dispatched Nantahala 71-19 on Tuesday night.

The home team opened a 10-point lead after one quarter and never looked back. Stifling half court defense led to several open layups off of fastbreak opportunities.

Highlands (5-7 overall, 2-0 LSMC) will be back in action on Friday night at Cherokee.