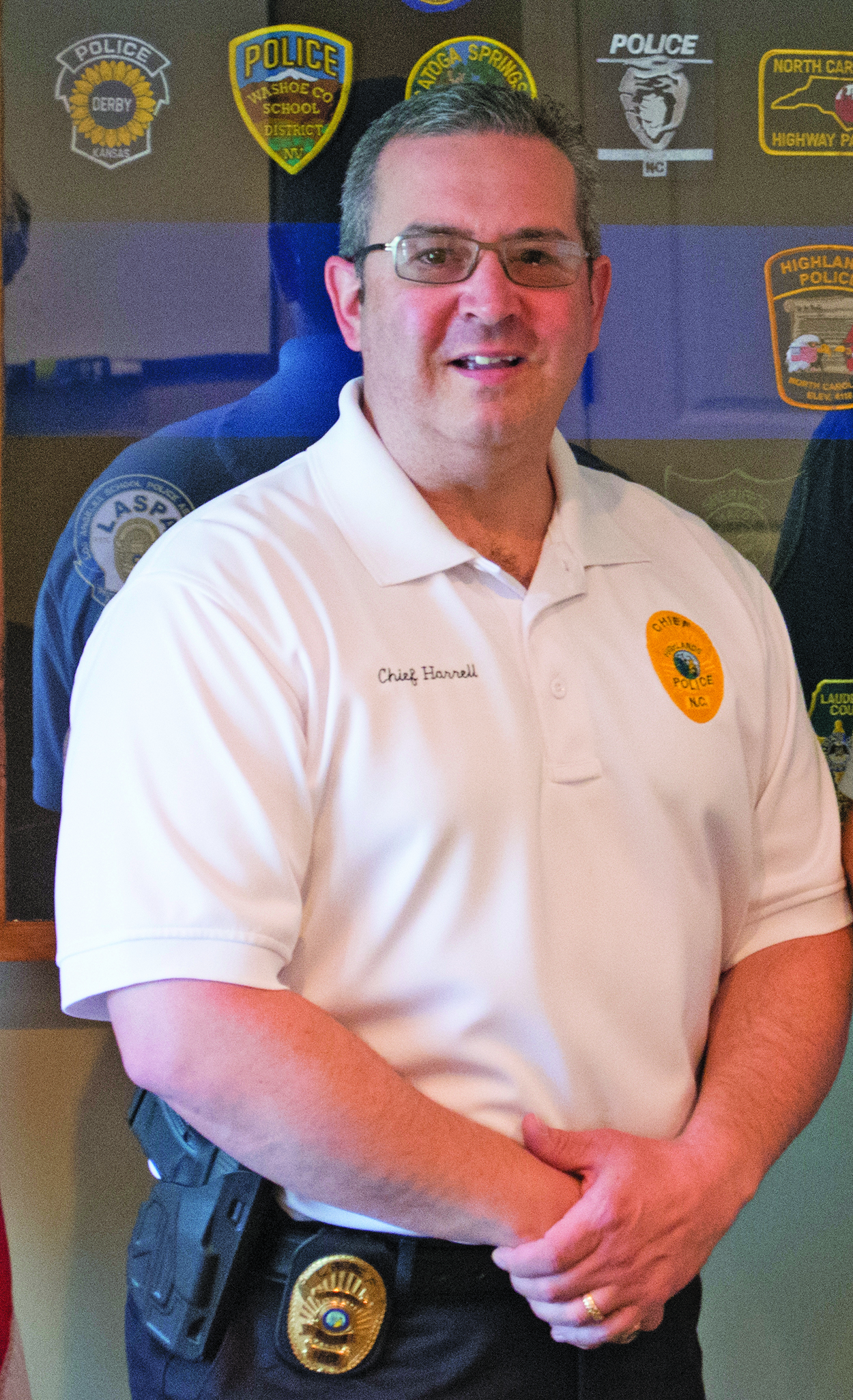 Town Manager Josh Ward announced on Wednesday, May 6 that Harrell submitted his resignation effective June 1 as he had accepted an offer to become the next Chief of Police in Franklin.

Harrell succeeds former Police Chief David Adams who announced on Feb. 14 he was leaving to become Chief of Police in Waynesville. Since Adams’ departure, Capt. Danny Bates has served as interim police chief.

A Franklin resident and former police officer there, Harrell has served Highlands as its police chief for more than 14 years and said going back to Franklin is the culmination of a career dream spanning nearly 27 years.

“I am nervously excited for this opportunity,” Harrell said on May 6. “I have traveled for the experience of other agencies that would inevitably mold me for this transition and I look forward to getting to know and serve with the Town of Franklin leadership, police department, and other Town of Franklin departments.”

Ward thanked Harrell for his service to the Highlands community and congratulated him on his new position with Franklin.

“During his tenure, Chief Harrell has presented strong leadership and has elevated the Highlands Police Department to a high level of professionalism,” Ward said in a written statement on May 6.  “His education and training requirements for his staff have led HPD to become one of the most proficient departments in Western North Carolina.”

“During his tenure as the Highlands Police Chief, Bill Harrell has led the department in becoming one of the best trained and professional law enforcement organizations in Western Carolina,” Taylor said in a released statement. “He has acquired many grants and recognitions for the department. Under his guidance the department has state of the art equipment and has built strong community police relationships.”

Harrell thanked his family “for their unwavering support, patience and grace for this career path we have been invested for almost 27 years and it certainly hasn’t been easy considering all the sacrifices of missed birthdays, holidays, vacations and other special occasions.”

Harrell also thanked the Town of Highlands for their support over the years.

“It has been an incredible journey that I do not take for granted and I am forever grateful in their role of shaping me for my service there and this next chapter in my career,” he said. “I am also eternally thankful for the comradery of my colleagues, Highlands Police Department officers and staff, Town of Highlands staff and last but certainly not least, the Town of Highlands community.

Harrell called the friends developed and fostered by the loving hearts of the community a blessing beyond measure.

“They will be sorely missed, but never forgotten,” he said.

Once in Franklin, Harrell is optimistic he will continue to raise public safety bar started by his predecessor.

“I look forward to sharpening the strong talents, abilities and potential that I have recognized Franklin Police Department officers and staff possess,” he said.

Mayor Taylor wished his chief well in his new endeavor.

“On behalf of the Town of Highlands, we congratulate Chief Harrell on his new appointment as the Police Chief for the Town of Franklin,” he said. “We are certain he will serve Franklin, like he has Highlands, with faithfulness and distinction.”

Ward said the town will soon post the vacancy and begin a search for Harrell’s successor, “as soon as possible.”