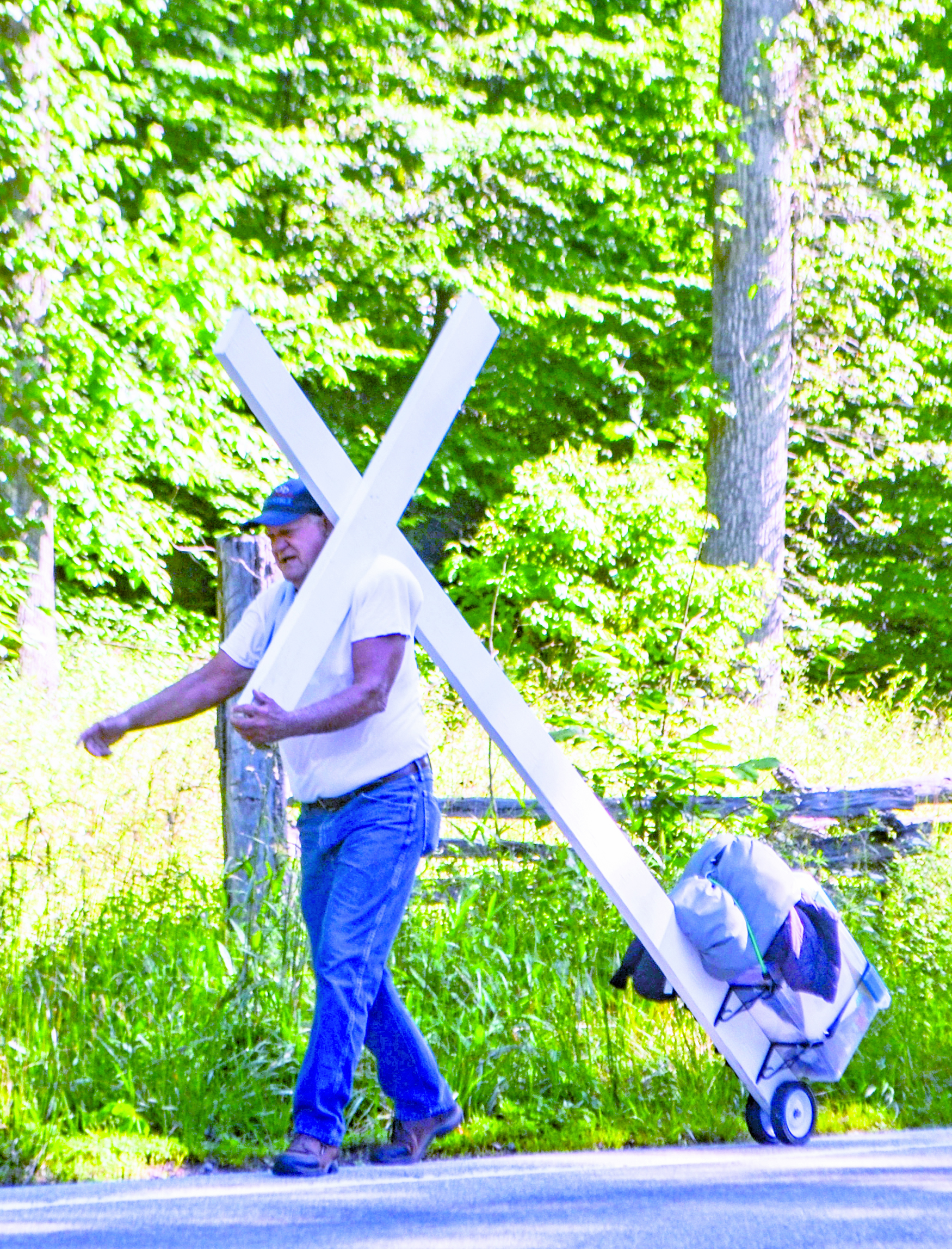 For Roger Gates, the decision to cross the country with a massive wooden cross was an easy one – in fact, in a way, he said the decision was made for him.

“I quit asking the lord ‘Why me? Why not somebody else?’” Gates said as he rested in Cashiers, stopping for a couple days on his way through the southern Appalachians. “Today, I just go do what he says to do.”

Gates is traveling from the coast of North Carolina to the Pacific Ocean in California on foot, a trek he expects will take about a year and a half. He set out in March, reaching Cashiers on June 18 and taking a two day rest before continuing on to Highlands.

The trip will be done mostly unsupported, walking with a stock of supplies strapped to the base of the cross and staying in towns, homes and hotels dotted along the nearly 3,000-mile journey. On June 22, Gates reached Highlands and stayed at Old Edwards Inn before making the treacherous journey down the Cullasaja Gorge on foot, headed for Franklin.

Gates said his relationship with Christianity has a long, complex history, and is the foundation for why he is undertaking this monumental effort. As a younger man, he said, he had begun down a darker path before he regained his faith and decided to make a change in his life.

“I found the Lord in McAlester State Penitentiary,” Gates said. “I was at the bottom of the barrel, and he lifted me back out.”

This is not Gates’ first transcontinental passage on foot – he said his renewed faith led him to take a similar walk shortly before turning 40. This time is different, though, Gates said.

“I did it once before when I was 39, and I took a different route through the Smokies,” he said. “But that walk was nothing but an obedient walk.”

His first crossing was inspired by a desire to connect more deeply with his beliefs and explore the boundaries of his faith in a more meaningful way than he felt was possible from the comfort of his home in Braggs, Oklahoma.

“We read the Bible, and we read how he will take care of his servants doing his will, but most people just read about it – they don’t really experience it,” Gates said. “The Lord wanted to show me that on that walk he would take me all the way across if I just do what he said to do. It was just me and him.”

By the time he finished his first journey, Gates thought he was finished with the task. But as soon as he reached the Pacific Ocean, he said, he felt immediately called to continue his mission.

“When I finished the walk last time in California, I laid the cross in the ocean and I said, ‘I’m done,’” he said. “But the Lord told me I had one more big walk. I waited 31 years to make that second walk.”

This time around, Gates is raising money to create a warehouse of food and medical supplies for those in need. He hopes that those inspired by his commitment to the journey will contribute in some way to his mission, he said.

“This is about the warehouse he’s told me to build – it’s for future generations, to keep his people busy today in his works and not worry about what else is going on so much,” Gates said.

Although he hopes the walk will draw attention to the efforts to make his vision a reality, Gates is quick to direct the attention away from himself. The whole point of the walk, he said, is to spread God’s word and focus on those works.

“This isn’t all about me. This is all about what God is trying to do for his people today and the future,” Gates said. “There are things coming up that the world’s not ready for, and he’s making a way for people who aren’t even born yet.”

Despite his age, Gates said he feels confident in his successful passage across the country. Having traveled more than  400 miles in the past three months entirely on foot, he said he has no plans of stopping before he sees it through.

“I’m 71 years old, but I’m in good health and I feel stronger the further I go,” he said. “It’s the journey of a lifetime, and I’m glad the lord has given me the opportunity to serve him this way.”

To follow along or make donations to Gates’ efforts, search for Ministry of Truth on Facebook or contribute directly at paypal.me/ministryoftruth1.